Originally Published 12/4/2009
Last Updated 9/4/2018 with the announcement of the Mississippi State series.

This post starts with a strong caveat: much of this information will probably change in the years ahead. With that said, fans are always interested in examining future schedules, so I wanted to keep an up-to-date summary of what we know. I will update this article over time as new announcements are made.

This topic became especially relevant prior to the 2010 season, where the scheduling of two FCS opponents kept the Devils out of a Bowl game. Fortunately, our future non-conference schedules are much stronger.

Remember that with the Pac-12 schedule, in odd-numbered years we have five conference home games, including divisional opponents USC, Colorado and AU. In even-numbered years, we play only four conference home games (including Utah and UCLA). It's going to be a lot harder to sell season tickets in those even-numbered years. The Pac-12 will no longer announce the conference schedule years in advance. They will now wait until the end of the prior year to set the schedule for the coming season. This allows the conference to ensure good games for the new Pac-12 Network based on each team's projected performance. However, we do know which Pac-12 teams ASU will play each season through 2018.

Let's review the out-of-conference schedule. As most fans know, the traditional philosophy behind the non-conference scheduling has been to have an "A", "B" and "C" level opponent. The additional requirement is to have at least two of the games at home, especially in even-numbered years when we only have four conference games at Sun Devil Stadium. However, from 2011-13 we saw more of an "A, A, C" model. DevilsDigest.com published a Q&A with Associate Athletic Director Mark Brand in February 2010 that explains the process in a lot of detail. I never understand fan criticism of our scheduling, because most neutral parties see our out-of-conference schedule as one of the best year-in, year-out.

The "A" level opponent is from a Power Five conference. In recent seasons, Illinois, Missouri and Wisconsin have been "A" level opponents. ASU was planning to play a home-and-home series with LSU in 2015 and 2016 but that series has been pushed back multiple times.

Ideally, we should play an "A" level opponent at home in even-numbered years to counter the lack of quality Pac-12 opponents. We have achieved that goal for 2012 through 2020 after striking out in 2010.

The "B" level opponent is from a FBS "Group of Five" conference such as the MWC or C-USA. In the past, these schools may have played twice at ASU in return for one game at their site, but is seems like we will have a harder time finding "B" level opponents in coming seasons. UTSA, San Diego State and UNLV are the next opponents in this category. Each of these series are home-and-home. The Fresno State game in 2023 will be the first single game series versus a Group of Five opponent since Louisiana-Monroe back in 2009.

The "C" level opponent is usually an FCS school, and is always going to be an opponent that does not require a return visit. We try to schedule NAU as often as possible for this slot, which is a nice way to keep the money in-state.

Coach Todd Graham has placed additional emphasis on recruiting in Texas, and games in Texas are of special value. After playing Notre Dame in Dallas in 2013 and Texas A&M in Houston in 2015, we have upcoming games in San Antonio (2016), Lubbock (2017) and San Marco (2024).

So let's review the current plans for future seasons. Click on links for announcements of specific games. Actual dates shown when known.

Posted by phillydevil at 6:17 AM 2 comments:

Last year, I published a list the Sun Devil football program's ten biggest wins. I received some excellent feedback, and it was clear I missed two critical victories: the 1975 win over Arizona, and the 1986 defeat of Washington. Also, the 2014 season saw the win over Notre Dame which, I believe, belongs on this list. So in advance of the 2015 season, here is the updated list of the ten thirteen biggest wins in ASU history.

Posted by phillydevil at 7:32 AM No comments:

On the eve of a new season for ASU football, here's a list of the program's ten biggest wins, which includes last year's victory over UCLA.

And now the season begins

Prior to the start of the season, I predicted a 6-3 conference record for the Devils, and an 8-4 overall record. So far the season has gone exactly to form. The USC game was far more important than any of the others, and we won that one.

So here we sit on October 8: 1-0 against the Pac-12 South, 1-1 in the Conference. We still control our own destiny. According to Sagarin, we're the 20th ranked team in the country having played the nation's 7th toughest schedule. Wisconsin (18) and ASU are the only two-loss teams in the top 20.

The biggest concern at this time isn't so much the Devils (we are pretty much who we thought we are) as the other teams remaining on our schedule. Colorado is still weak, but they're improving. The road games at WSU and Utah will not be easy, and the home games versus Washington, Oregon State and UNRB are all dangerous. And that's not to mention the big game at the Rose Bowl on November 23. So while my 6-3 conference prediction is still very attainable, it's also not hard to see us ending the year at 4-5.

So if ASU does finish this season at 5-4 or better in the Pac-12, it will be just the second time in 30 years that we've bucked this trend.

Note: this article updates my original research from 2008.
Posted by phillydevil at 10:58 AM No comments:

Posted by phillydevil at 6:03 AM No comments:

Season tickets are in the mail! 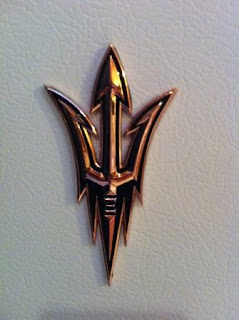 Season ticket holders are starting to report that their tickets are arriving in the mail. Always a good sign that football is just around the corner! This season the package includes a copper and gold pitchfork (thanks to mDevil for the picture!).
Posted by phillydevil at 4:56 AM No comments:

Love to see Sun Devil Olympian Kelsey Campbell throwing up the pitchfork during the Olympic opening ceremonies. Follow all of ASU's representatives in London on twitter by subscribing to this list.
Posted by phillydevil at 7:53 AM No comments:

Posted by phillydevil at 7:32 AM No comments:

Left lane, hammer down!
Posted by phillydevil at 7:57 PM No comments:

Posted by phillydevil at 1:12 PM 6 comments:

Promote Your Page Too